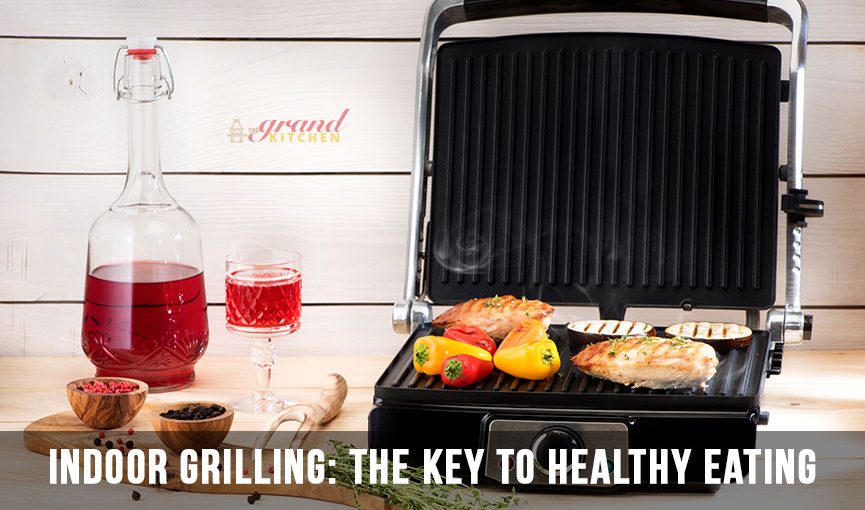 One of the best ways to eat healthy is with grilled foods – especially over fried foods. All the experts agree that it's a healthier choice when it comes to your diet. Fried foods are filled with grease. They're covered with a coating that packs on the calories, too. While grilled foods are healthier than fried foods, there are plenty of other reasons that grilling is a healthy way to stay fit and trim.

One of the biggest benefits to grilling is the fact that you don't need to use any oils on your food. The indoor grill has raised ridges that are made with a coating that keeps the meat and vegetables from sticking. Some foods might stick, though, and in that case, you'll want to use a non-stick spray. For the most part, foods won't stick to the surface of the grill.

Oils are often used to give meat its flavor, but that's not necessary when you're using an indoor grill. The flavor will come from the sear you give the outside of the meat you cook on the grill. You'll be able to sear in the flavors to keep the meat from losing all its juices. You can even create a crosshatch mark on your steaks, pork chops, or burgers while using an indoor grill.

Keeps Fat to a Minimum

When you reduce the amount of oil used on your meats when cooking, you'll be reducing fats and extra calories. While some oils are good for you like olive oil, most oils should be avoided or used in moderation for healthier cooking.

Along with a reduced need for oil, the fat from the cooking meat will drip away from the food. Some grills boast that as their biggest claim. Whether you're making burgers, steaks, fish, or chicken, the natural fat in the meat will render and drip out of the meat onto the surface of the grill. The ridges on the grill are meant to be used as channels for bringing the fat away from the food.

When you're choosing your meats at the grocery store, work on finding leaner cuts of meat. Hamburger can come in lean options as well as steak and pork chops. Chicken is a meat that is already on the lean side. Fish and turkey are other options for meat with less fat, too.

With your indoor grill, it'll be easier to experiment with different cuts of meat as well as options you may not have considered before. Don't be afraid to experiment with a fish you have never tried or a technique on the grill that you can't do with your stove top or oven.

Vegetables on the Indoor Grill

Healthy eating involves more than just using less oil and taking advantage of leaner cuts of meat that don't soak in their own fat. It involves eating a more balanced diet with fruits and vegetables. Cooking vegetables on an indoor grill gives you a tasty way to add more greens and veggies to your diet.

Those vegetables won't be soaked in oil, but the searing in of their juices will give them extra flavor, too. Like steaks or burgers, searing veggies is a great way to give them an added boost of flavor. That's something that can be sorely lacking in most diets, which is why everyone hates to diet.

Eggplant, tomatoes, bell peppers, and zucchini are great for grilling because you can cut them into slices that fit beautifully on the indoor grill. You have likely never tried vegetables cooked directly on the grill, either. On an outdoor grill, those vegetables would have fallen between the grill slats.

Grill Some Fruits for Variety

Pineapple, mango, apple, or pear have such a sweet flavor when they're grilled. This could help you eat healthy if you have a sweet tooth that demands you eat sweets. These sweets won't cause the same damage to your diet as a piece of candy would. You'll be able to stay virtuous on your diet while enjoying some flavors that are quite a change from what you're used to eating.

When you're grilling turkey or chicken, removing the skin will cut down on the fat and calories. While chicken is pretty low in fat, there's still some that needs to be trimmed from the meat before it's cooked. That's true of turkey, too. Remove the skin and trim the pieces if they haven't been done for you at the store.

Marinate for the Best Flavors

While you don't need oil on your meat when you grill, using a tasty marinade that is low in sodium, sugar, and fats can make the meat taste even better. They can be added before the grilling process to infuse the meat with incredible flavors. All your food will taste better when you marinate before grilling.

Never Use a Fork to Flip

When you are cooking on the grill, never pierce the meat. You'll release the best juices and end up with a dry piece of meat. That dry piece of meat will demand sauces or extra salt and other condiments to make it taste less dry.

Skewers of Meat and Veggies

On an indoor grill, you can make an entire meal with a skewer. Most of the time people make unhealthy choices because they're making fast choices due to hunger. At the end of the work day, nobody wants to spend hours making a meal. Skewers are a fantastic alternative to fast food.

Healthy indoor grilling starts with the cuts of meat that you choose. Limit the meat to choices that are lean and low in fat. Use the grill for cooking vegetables that you wouldn't normally cook on a grill. It'll give you completely different flavors. It's great for cooking sliced fruits and small veggies that would slide through the slats of an outdoor grill. You can experiment with flavors on an indoor grill to expand the types of foods you can eat on your diet.

How to Keep Your Masticating Juicer Clean & Healthy?

How to Make Healthy Meal on Your New Indoor Grill

How to Keep Your Indoor Grill in Great Shape?

9 Benefits of Juicing with a Masticating Juicer